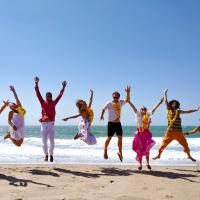 What is Mukta Tantra Yoga?

Mukta Tantra Yoga is the Inner Yoga of Ancient India, the yoga of awareness and presence. The secret of absolute freedom!
Mukta Tantra Yoga is not Hatha Yoga or Neo Western Tantra or Western Kundalini Yoga. Historically, it is the only philosophy in the world that is not male chauvinistic and doesn’t discriminate between any nationality, class, color, gender and religion. It has evolved very differently in a non-dualistic environment and passed orally from generation to generation. This type of yoga cannot be found through self-claimed scholars or theirs books and it is not a commodity that you can buy. It is a heart to heart connection and a direct perspective of free mind. Mukta Tantra Yoga is only for those who are not looking to convert themselves from one system of belief to another. This is not a spiritual romantic escape or an academic trap to get lost in translations, but a key to dissolve self-inflicted sorrow and to celebrate our uniqueness beyond all comparisons. A healthy doubting, skeptical and critical mind is a free mind because it doesn’t want to follow or obey blindly to the rules given by societies and so called leaders. An obedient mind is a mechanical mind that can easily be exploited to serve the old establishments which only feed on fear and greed.

True Spirituality is not conforming to any pattern given by others or oneself, rather getting rid of all patterns (spiritually or worldly) is true spirituality.

Mukta Tantra Yoga is a golden secret key to the absolute freedom. It is the Essence of all Asiatic Mysticism.

Mukta Tantra Yoga is authentically using a Traditional Kundalini Tantra Yoga of Tantric Asanas, Kundalini, Chakras, Mantras, Tantric Meditations, Tantric Breath, Bandhas, Prana, Sounds, Vibrations, Light, Prana, Elements, Energies, Soma and Recognition to remain present in the moment and reflect our true nature without the interference of conditioned mind. We are using our body, mind & senses to express our true freedom (also called Pure Consciousness by Shiva) and to unlock the bliss of life, which is also called Kundalini Shakti in Tantra.

To understand and freeing these energies, we use practical philosophy inspired by Traditional Tantra also called Kashmiri Shaivism, Agama, Trika or Himalayan Tantra, the essence of The Heart Of Shiva.

Mukta Tantra Yoga supports self-awareness born out of direct observation. Awareness makes us present to face daily life as it comes and responding with the fresh intelligence of the moment.

Mukta Tantra Yoga supports others to see directly in their own light beyond all dependency on systems, cultures, traditions, organised religions, bookish knowledge and self-claimed gurus. Traditions are there to be used and not to get used or obsessed by them. They are the shadows of truth which modern scholars are trying to catch. We are the truth, just start expressing it with no excuses to seek for it. Welcome to Mukta Tantra Yoga to vitalize your senses in order to manifest your truth.

Truth is not a monopoly of any lineage rather the essence of a rebellious heart who dares to break through all the traditional lineage of the past to express truth freshly in order to use tradition rightly. Only lies are repeatable not the Truth because truth is always fresh and always need to come upon freshly. Following Tantra is not a goal, rather understanding oneself is true Tantra. Traditional Tantra reflects the experience of Asiatic Mystics who have expressed their true freedom. It can become just an inspiration to taste our own freedom.

‘Tantra‘ is a science to crack the code of our true nature (pure consciousness, bliss or freedom). It is eternal and always free from body, mind and feelings. There is no goal to achieve rather experiencing the true bliss of life which is already there.

There is no Road to Freedom. You are it. All roads lead us away from our true nature. Until our true nature is manifested biologically, psychologically & emotionally, it remains simply an idea but life is not an idea. It is a vibrant reality in the here and now.