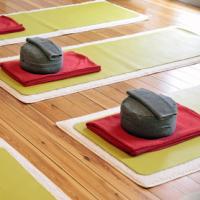 The Swami Salami School of Yoga

Hi, I'm the Swami Salami. Or that's what my disciples like to call me. My hobbies include Origami, making hand-crafted Chinese kites (not the fighting kites, but the lovable ones) and my NO! seriously. My name's Rob Ogle and I'm the only one that refers to myself as the Swami Salami. Why? Because I've met some pretty pompous yoga instructors with ridiculous bios and photos of themselves doing some difficult yoga postures over picturesque scenery in Costa Rica or Big Bear who take themselves far too seriously. Although I joke about being the Swami Salami, I don't joke about yoga. I teach the Atma Vikasa system of traditional Hatha yoga developed by Yogacharya Venkatesh in Mysore, conduct classes in both Chinese and English concentrating on standing postures, back bending, forward bending, twists, abdominal postures and inversions during which I place emphasis on breathing. I teach my students how to release tension and concentrate on their breath while their bodies are under stress. Hopefully they can then incorporate the lessons I teach in class into their daily lives.