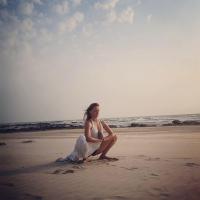 Aida has started her Yoga journey in New York in 2006, where she spent five years studying, working and learning Yoga. After a very short period of practicing Yoga she already felt some therapeutic benefits of Yoga (she healed her asthma from which she suffered 10 years before, and she also improved her health in general). Yoga was for Aida, from the very beginning a daily practice, which she never could avoid.

Aida finished the education through the Yoga Works system in 2009, and continued to learn and improve her knowledge with famous teachers (Sharath Jois, Mark Darby, Laruga Glaser, Gabriele Severini, David Robson, Harmony Litchy, Ajay Tokas, just to name a few). Aida decided to return from New York and to found the first Yoga studio in BiH which would offer Vinyasa Yoga, and that is how she started her path in Sarajevo, the place where Yoga was the most neccessary.

Aida founded the Prana Yoga Studio in May 2010, which besides the permanent Vinyasa programme offers always diverse Yoga styles (Ashtanga, Yin, Prenatal, Hatha) and where Aida invites travelling teachers, who help the students to deepen their knowledge and techniques in Yoga. Prana is a place where Yoga is not only practiced daily, but also a place where Aida helps people with health issues, such as PTSD through the Trauma Release Exercise method by David Bercelli (), and in this way Aida helps everyone to reconnect with themselves and to act out of love following the ethics and prinicples of Yoga as one unity, and not just one aspect (asanas).

Her idea is to separate Yoga primarily as a therapeutic discipline, from a spiritual and philosophical practical discipline, through her classes, which are steps towards a transformation of the spirit and body. This approach helps us to focus on the practice as something much deeper then a physical aspect, and to start feeling Yoga not only through stories, or others' beliefs, but to truly let it in and to experience it on our own. In her work Aida combines different methods, Iyengar Yoga, Ashtanga system, Kundalini meditations as well as basic breathing techniques (Pranayama), because she found benefits from every and each of these traditional systems through years of studying and practicing Yoga, being respectively taught by the father of modern Yoga, Krishnamacharya.

Aida has started her path and practice with Sharath Jois in 2011, the successor
of the Ashtanga lineage to whome she immediatly felt connect as her Guru.
Meanwhile Aida became a mother of the beautiful Sofia, and her practice for the last three years is motherhood, which is the highest level of the spiritual practice;
a practice in which all the lessons of Yoga merge on a daily basis- patience, devotion, being present in every moment and having the conciousness about your actions, living completely in the present moment and letting ourselves become the child's student, and at the same time a teacher, finding balance in every life aspect.

Her intention is to continue her growth with every day, and to share her teachings through love and dedication towards her daughter and Prana Yoga Studio community, which grows simultaneously with her. Aida wants everyone to reach their internal freedom, which she reached through Yoga, and she also wants everyone to know how much he/her is valuable, loved and that everybody is the same under the level that covers our true nature.

She is now practicing and studying Ashtanga Mysore system under the guidance of Sharmila Desai Ashtanga Yoga Morjim.