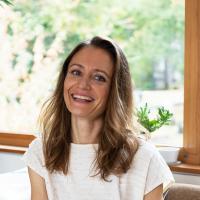 Born to the wilds of Arizona, Brienne early on came under the spell of yoga. A thirst for higher education landed her in the upper reaches of the Willamette Valley where she again expanded her reach by first earning a degree in Architecture while discovering the ancient roots of Ashtanga Yoga. She felt this tidal influx and rode that wave to a crescendo by later earning a Masters in Interior Architecture, dutifully accompanied by her continued and deepening passion of yoga.

With nearly two decades of dedicated practice, Brie now has seen her vision blossom on her internal lotus by formalizing her training with Tiffany Cruikshank where she attained her 200-hour registered Vinyasa Yoga teacher status, as well as advanced trainings in both Vinyasa and Gentle Aerial Yoga.

Currently, she owns a local design firm (www.) that focuses on improving health and wealth of the community, as well as hosts Restorative and Gentle Yoga classes at Rasa Yoga in Medford & Ashland, Oregon.