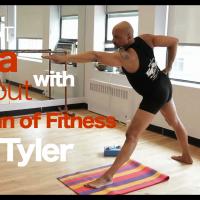 Charles Tyler, widely known as the Shaman of fitness, is on a mission to help Americans enjoy getting into shape. Long a master coach of Yoga, Pilates, Aerobics, Body Sculpting, Spinning, and Urban Rebounding,International QVC presenter, Tyler is highly regarded as the originator of “The Jojo,” a workout system and methodology that fuses strength, cardiovascular and flexibility training to helps individuals achieve a balanced mind, body and soul.

A distinguishing feature of “The Jojo” is the connection between movement and music. An avid music collector since the 1970’s, Tyler draws from an eclectic and exciting mix of genres that includes Classic Soul, Latin, Classical, New World and more. His melodic and rhythmic choices add special energy and pleasure to this workout. Tyler is passionate about taking the body to its maximum peak and the health benefits of releasing endorphins.

In the past decade, Tyler has certified more than a dozen Yoga teachers through his Yoga4Soul program, featured in the 2010, July/August issue of American Fitness Magazine as one of the top International unique fusion classes. A national educator for the American Council Exercise (ACE) and Aerobics Fitness Association of America, he certifies instructors in Urban Rebounding and established the first program of its kind in London. Tyler’s Urban Rebounding program was featured on NBC’s Today Show and Good Day New York in 2004.

Tyler is a member of the Yoga Alliance and an Educator Registered Yoga Teacher (ERYT) with 500 Register Yoga Teacher Certification. He developed workshops, educational tools and a certification program for Energy Resistant Ball (NRG). Tyler also served as an Instructor’s Performance Evaluator and Fitness Consultant at New York Sports Club.

Among the classes Tyler has created are: Power Hour Body4Soul, Soul Spin, Yoga4Soul and Low Fat Yoga, all designed to uplift mind, body, and spirit. His Urban-Rebounding classes include; Hip Hop Bound, Latin Bound, African Bound, Yoga Bound, and Oldies but Goodies. He created the Club Series for Town Sports International Sports Clubs, a state-of-the-art fitness program for the general public incorporating training for strength, flexibility, cord and yoga. He also developed, with other trainers the cross-training program, TRANX, a combination of TRX bands, tread mill, and strength training.

Tyler has served as fitness coach and personal trainer to celebrities that include Madonna, Susan Batson, Luther Vandross, and cast members from the acclaimed HBO series, The Wire. He was featured in an infomercial for Jackie Chan’s Cableflex and aided in the production of 19 videos to showcase new fitness workouts. Additional publicity credits include developing an infomercial for Urban Rebounding, presented at World Ideal Convention in Anaheim, CA, (2000) and at San Francisco, CA, (2001).

Throughout his career, Tyler has shared his talents with communities that have not traditionally participated in fitness programs. As Vice President of Fitness Vibrations, he specialized in developing programs for children who are critically ill or are substance abusers. Tyler contributed to former First Lady of New York State, Michelle Paige Paterson program Healthy Steps to Albany, designed to bring health and wellness practices to children in New York City public schools.