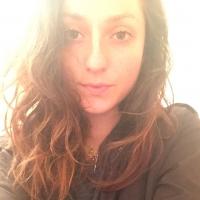 Clare's yoga journey began in attempt to find grounding and balance that her life lacked. She received her 200 hour RYT training from Rocky Heron of YogaMaze. She has studied with Robert Boustany, Briohny Smyth and Dice Iida-Klein, amongst others. Her primary local teacher is Natalia Callard, an avid student of Robert Boustany's herself. Clare feels deeply in tune with Boustany's ideas on energy flow and kundalini. She graduated from the University of Oklahoma with a Health and Exercise Science degree and gained a much deeper understanding of anatomical alignment. The combination of theories on energetics, alignment knowledge, and intuitive movement and ideas, sums up the bulk of her teachings. She was a high level gymnast in her youth, so she has always had a precise grip on the body's orientation in space. Her classes are slow and meditative, allowing time to properly align. She has studied Asian and yogic philosophy both in school and in her free time, so one can count on integration of these in her classes. Clare is a musician, which is also a major part of her yoga practice and life.