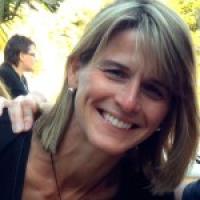 Ellen brings a dynamic, authentic approach to teaching yoga with the goal of making it accessible to all levels of students…particularly athletes, skeptics, beginners, or all of the above. She is a Midwestern native with a background firmly rooted in the sports and fitness world. A former Division I athlete with a master’s degree in sports administration from Ohio University, she spent 19 years in various sales and management roles with NIKE in 5 cities across the US. In 1996, Ellen was introduced to yoga to address a sports-related injury and quickly realized that yoga was a game…and life changer. Eight years later, she began to teach and has been an avid student/practitioner ever since. Ellen completed her teaching certifications with power yoga luminaries, Beryl Bender Birch and Baron Baptiste, and gives thanks to the many other teachers who have influenced and inspired her teaching journey. In addition to her ashtanga and vinyasa background, Ellen is also a certified Yoga Tune Up teacher. She has been teaching at Equinox Fitness Clubs and several other top yoga studios in New York City and Los Angeles since 2007. In addition, Ellen served as the official yoga instructor for the NIKE North American sales force from 2011-2013. She has assisted Beryl Bender Birch at several national yoga conferences around the country and looks forward to more fun down the road with her mentor. Ellen is thrilled to be teaching yoga at the Ojai Valley Athletic Club (Ojai) and just up the road at the Power of Your Om (Santa Barbara). She also teaches at Equinox in West LA on occasion.

Ellen Bain doesn't have any classes this week. Inquire about their schedule ▶