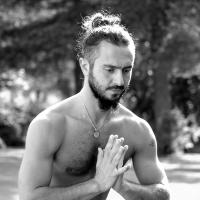 Konstantinos Tournas has been practising Ashtanga Vinyasa yoga since 2006 and he started teaching since 2007 full time. He has done several workshops with Sharath Jois and with authorised Ashtanga Teachers from KPJAYI such as, Luke Jordan, Catherine Moran, Petri Raisanen, Luise Ellis, Kristina Karitinou and many more. He has his authorization from Manju Jois. His great inspiration was Rolf & Marci Naujokat in May 2018 in Goa. He felt that a new path in the practise and teachings of Ashtanga Yoga has opened for him.

In 2009 he completed an one year training course learning Hatha yoga, breathing and relaxation techniques in the Art of Living Ashram in Germany by world renowned Guru Shri Shri Ravi Shankar Himself. His training also included Ayurvedic healthy diet, healing and mantras. He is authorised to teach Sudarshan Kriya (a powerful breathing exercise unique to Art of Living yoga training).

In 2013 he completed Thai massage training and gained 1st degree in Reiki practice. In 2015 he completed Pranic healing therapy (a simple yet powerful and effective system of no-touch energy healing). After some months of practising Yin Yoga he felt the healing effects of this practise and in June 2019 he did his training and got the authorisation from Yoga Alliance to teach Yin Yoga.

Wanted to go deeper to the tradition of Sri T. Krishnamacharya he completed the Advanced 100hr Vinyasa Krama Yoga Teacher Training by Ramaswami Srivatsa, the long lasting living student (more than 30 years) of the legendary Krishnanmacharya, in Chennai, India in February 2020. He fall totally in love with this method, its purity and authenticity! Vinyasa Krama became part of his daily practise. He is also an active participant of self-realisation group which enables him going deeper to the knowledge of the Self and of human nature.

He is a 3rd series practitioner. He frequently delivers Ashtanga yoga Workshops in Crete, Spain, UK and other countries in Europe and yoga retreats worldwide.

Konstantinos is a very kind soul. He is very sweet speaking person and does very warm hugs. During the practice Konstantinos helps students and corrects their positions if needed.

Konstantinos is a great teacher, always helpful, patient and understanding each one's needs separately! He loves what he does and that makes it contagious! :)

He is excellent, friendly, teacher who offers us all the knowledge we need!!
I am thankful found on my way

Konstantinos is the best teacher

Great honor to be student of Konstantinos, he is the best teacher ever.

Konstantinos was one of the best part of our trip to Crete. As a yoga teacher he delivered well planned yoga classes that catered to the students different levels of practice. His dedication to yoga is evident in all he does. He is a beautiful person who shared his light with us and we were so honor to receive it.

Although I have taken yoga classes in the past, I have never had the full experience until I joined Konstantinos' retreat! Beyond the excellent physical practice, we had interesting discussions about chakras, karma, and breathing. Meditations were deep, and Konstantinos himself is a perfect example of one who lives his practice in all aspects of life. He is joyful, kind and patient. Overall I learned a lot more about yoga as a lifestyle, and will always be grateful to Konstantinos for his kindness!

What can I say about Konstadinos? (Or as he would maybe now correct me as Kostadinee)
As I booked the yoga retreat back in the days, I did not really make any considerate thoughts about how its gonna be. To be honest, I just wanted some kind of activity on my holiday on Crete. And there I was, bloody yoga beginner, but dashing into the whole retreat with optimism. And guess what, it all turned out to be a great experience! Not exagerating here. He is very patient and demonstrates a lot when it comes to the exercises itself. But what I find even more fascinating was his spiritual lifestyle. Hence we had a lot of interesting discussions about mindfulness etc. Nothing more to add but: please continue untill you are 400 years old!

Kantstanios is a very skilled yoga teacher. His teaching is inspiring and his knowledge of every aspect of yoga is brilliant. His ability to provide one to one support in a group class is so skilful that I felt that I had all his focus on me throughout the class and I bet all the other students felt the same way.
He is a true yogi who not just teach yoga but also follows the 8 paths of yoga in his personal life which becomes so evident when he teaches. I am very lucky to have the privilege of attending his yoga class.

Konstantinos is an excellent and inspiring Ashtanga teacher who challenges me to discipline my mind by disciplining my body. He has a great flow and timing in his instructions. He is sensitive to my level and what positions I am able to do, but will also challenge me in a balanced way to deepen my practice. He is physical in his adjustments and really helps to get into positions in a great way. He has helped me into positions I've never even imagined myself in. He is a true inspiration both when it comes to what is possible to do with the body but also more importantly, the mind.

I learn something new and intetesting every time I talk or practice with Konstantinos.

He is not only a good teacher with knowledge, experience and continious research on yoga but also a nice and "clean" person.

Dear Katerina, thank you so much for your nice words.
You know something? You said that I am a clear person but you can see this because you are clear too! :-) Love!

Konstantinos is my Ashtanga Yoga teacher. He is talented, spiritual and experienced.