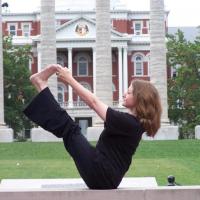 As yoga has been a passion of mine for more than a decade, it felt natural to want to teach. I find that passing on the joy that is yoga is a wonderful feeling!

My first exposure to yoga was in my final year at college 2000-2001. I took lessons from a teacher who taught from the Iyengar tradition. This tradition, put simply, has a heavy emphasis on alignment in each pose, and generally, poses are held for longer durations.

After that year I continued to practice on my own with videos and books until I began going to alleyCat Yoga here in Columbia. This studio has a mix of styles, but primarily teaches in the Kripalu tradition, which focuses on a more gentle, compassionate practice.

In September of 2008, I did a 100 hr beginning training in St. Louis at Clayton Yoga in the Ashtanga/Vinyasa Flow style. I immediately resonated with the strength and energy of this style.

The part of my first teacher training that really stuck with me was the Flow aspect. The element of dance in a yoga sequence or pose itself. This was the main reason I decided to sign up for another teacher training in Kansas City. I want to teach Vinyasa Flow yoga! This style really feels like “home” for me. I did my teacher training with Gina Caputo, a Prana Vinyasa Flow teacher, now based in Boulder, Colorado.

I then studied Ayurveda and Yoga Therapy with Matt and Holly Krepps through the Circle Yoga Shala in Jasper, Arkansas. I completed my 500hr training with them in March 2016.