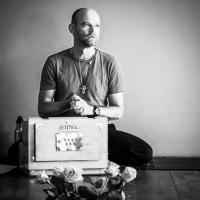 Starting with Kundalini Yoga I got to know after a couple of years the yoga taught bij the Bihar School of Yoga, known as Satyananda Yoga and Bihar Yoga, an integral yoga system.

I joined in an intensive teachertraining and feel deeply connected with this yoga tradition. In the last years I was inintated in mantra sadhana, jignasu sannyas and later as a karma sannyasin.

Now I teach yoga, meditation, yoga nidra and yogatherapy in my own retreat center Yoga Sadhana in the Netherlands.

I yearly visit the ashrams of Bihar Bharati or Rikhia voor seva, diksha and yagja.