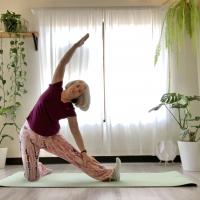 I am registered and certified in Integral Yoga, a style which emphasizes respecting your boundaries while challenging yourself. A PTSD survivor myself, I teach in a trauma-sensitive manner and encourage student choice. I specialize in beginners classes, Yoga Basics, Gentle Yoga, Restorative Yoga (a practice of deep relaxation), and LSD (Long Slow Deep) classes. My background includes Iyengar, Yin, Dharma Mittra, Jivamukti, Anusara, Kripalu, and other styles of yoga!

I hired Stephanie as a private yoga instructor & I can't say enough about what a wonderful decision this was. I have tried yoga classes in the past & have always struggled to keep up. Stephanie has been so patient & has explained everything so well. I finally feel like I understand things & am making progress as I never did before. I highly recommend Stephanie for whatever experience level.

I did not know I LOVED restorative yoga until I took Stephanie's class! Check it out!

I enjoyed Stephanie's restorative yoga classes @ BeYoga in Redwood City and was sad to see that studio close. Stephanie has a well-modulated voice, thorough knowledge of her practice, and a very pleasant manner.

great teacher i wish i had more time to do yoga with her i should have more time comming up though so i hope to get back into the swing of things :)

Stephanie really encourages people to work at their own pace. Class with Stephanie is a great way to work at your own pace, learning poses and doing what works for you!

Stephanie is a fun person, but serious about teaching yoga the right way. She knows anatomy and explains why things should be done a certain way to avoid injury. She emphasizes that you should listen to your body and only do what feels right. You don't have to be a pro to enjoy her classes, but even if you're experienced, you'll learn something every time.

I've been in and out of yoga now, and have had my share of good and bad instructors. So, to say I was surprised when I took her class, would be a bit WRONG! Stephanie is a very caring instructor and she's not intimidated nor uncomfortable by having men in her class. In fact, she treats both sexes with the same passion, and for a person like me, it keeps me coming back. I'm 6'2" and have been in many classes where other big men were in, and they just could not get comfortable.

Every class I've been in with Stephanie, that had other large men, they either told her or I overheard them telling someone how much they liked her class. I just wish that someday soon, the large disparity between men and women in yoga will shrink. But, until that point comes, we're gonna need more Stephanies out there, otherwise, who's gonna take care of us male yogini's.

Stephanie was everything I was looking for in a yoga teacher. She was very knowledgeable and presented a very balanced practice. I learned proper positioning to avoid injury and adaptations to use while I was still working on flexibility and posture. She is very personable. I looked forward to every class because it felt like a spiritual retreat. I always left refreshed and grounded.