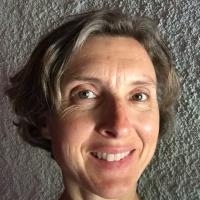 I started doing yoga in Malawi in 2001, where I practiced Asthanga Yoga from the tradition of Pathabi Jois with Canadian friends. We practiced a lot and others got interested in taking part. Our friend started to teach and when he left I took over the students. A nice community was built and people thrived. It was great to witness what good yoga did for us all.

I continued with Asthanga when moving back home to Copenhagen in 2004 but then I practiced mostly on my own going to an asthanga class now and then. During my first pregnancy I started Tai Chi and yoga for pregnant. It was good to explore other ways of getting a relation and a good relation with my body and with the baby.

In 2008, we moved to Uganda and I worked with the UN, and with a child and a full time job, yoga became a little squeezed. However, I felt I had a great base and I continued on my own, well knowing that a Danish lady living literally five minutes away from where I lived gave yoga classes. I got pregnant again and a workshop in yoga and non-violent communication came up - with that same lady and a mother from our daugthers school. There was the opportunity. On this workshop I met with other yogis notably two yoga teachers from South Africa. After birth I had time and slowly yoga took more and more of my time.

I started teaching small scale, there was space for my yoga teacher friend and me as the city is difficult to around in because of traffic. I loved it - refinding that wellness for the people and for myself. In 2011, the very same two yoga teachers from South Africa held a teacher training and I decided to go to Cape Town to do my training.

When moving to Jerusalem in 2012, I knew what I was going to do and since then I have developed classes at home, im Jerusalem gums as well as in the West Bank. My goal is to leave groups of people behind who are empowered to do their own yoga. I would love to see, and I am willing to give a lot, a few being trained to become teachers but that will be an extra gain. For me yoga is a personal thing, you can do it with others but what is there is entirely yours for always.

The yoga I teach has its starting point in the students in front of me. It is soft and vigorous and it is dynamic and quiet. It makes a point of training and controlling the mind with a practice that involves the breathing and the movement with the goal to syncronize the breathing with the movement and the mind. In other words, to assist us to be in charge of our actions.

2015 - Teaching Trauma Sensitive Yoga, a workshop for Yoga Teachers with David Emerson. The latest trauma theories and neurophysiology and how to approach a trauma sensitive yoga class.

In addition, I have been taking yoga classes in most places I have been as well as workshops. i have practiced Yin Yoga, Kundalini Yoga, Aerial Yoga, Hatha Yoga, Sivananda Yoga and Viniyoga, Vijnana Yoga as well as Iyengar Yoga.