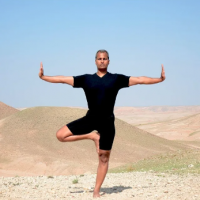 Head Teacher Perumal Koshy, born in New Delhi of South Indian parents from the state of Kerala, began teaching under a Kung-Fu master while living in Los Angeles. A ten year martial arts life through his teens and early twenties was followed by yoga. This began a yoga journey returning to his ancestral roots of Kerala, India and then England, Italy and Morocco. These experiences lead Perumal to capture the heart and values of the world’s yoga styles. His method is nothing short of being a practical and easily comprehensible form of Yoga.

Teaching 5 years of London yoga weekly group classes through dozens of clubs began the first sequences of Yoga with Perumal. Up to 15 group classes per week were taught over a 5 year period from the London center in Covent Garden through South, Kensington. Covering other teachers of varying styles from Shivananda, to Iyengar and Ashtanga with the Yoga with Perumal method was well received. The method began here learning to adapt to soft and hard styles of yoga. Following was 5 years in Milan, Italy which was an experience in intensive private lessons with up to 25 students at a time contrasting with large groups of cosmopolitan London. Numerous publications with Yoga Journal Italy and Italian seminars were established providing recognition of the Yoga with Perumal method. These Journals were syndicated through France and Holland. From the end of 2010, after 10 years of teaching yoga in 2 countries, pursuing a full-time yoga retreat schedule became an endeavour as the next step in the growth of Perumal. This led to Marrakech, Morocco with the year-round good weather as the ideal place for Yoga with Perumal retreat.

Senior Teacher Ines Stephan began a yogic pranayama practice with her father as a child while competing in sports. Athletics, downhill skier, waterski, badminton. Her father inspired her to practice pranayama breathing while watching sunrises and sunsets. The real discovery on healing benefits of yoga was through curing a kidney issue by simply repeating two yoga postures prescribed by an Iranian medical doctor. Her kidneys began functioning again without taking medications or undergoing a predicted future dialysis. This healing experience seeded a passion for yoga.

The spark of her father she continued studying the yogic science through André van Lysebeth, Gabriella Cella Al-Chamali and the Bihar School of Yoga from Swami Satyananda Saraswati. Hers was a multi-discipline solo yoga practice spanning twenty five years. Yoga was her strength to face daily challenges.
After 20 years of solo practice Ines went to India to learn from Anto Anthony a traditional Hatha Yoga teacher in Kerala. Anto Antony invited her to his parents house deep within the forest in North Kerala. Here she met Anto’s guru. Her practice deepened with the instructions from a traditional master. The relationship not only improved her yoga but it also opened her to experience something more spiritual.
In 2008 Ines began a practicing with and learning from teacher Perumal Koshy. She produced 30 online yoga video courses with Perumal and created the first real yoga retreats in Marrakech with Perumal. This lead to a 10 year partnership with the head teacher Perumal Koshy, who certified her as a teacher in 2018.
This lead to Yoga with Perumal retreats and holidays in Italy and Morocco, with an authentic grassroots feel at competitive prices.

See us online for video lessons or reach us for creating a retreat and or workshops in your location.

We look forward to seeing you at one of our retreats. Reach us for an 1on1 session

Yoga is Yoga, as well states.
There are no yoga Styles. There are various expressions of yoga. Popular methods such as Hatha, Ashtanga Vinyasa and Iyengar are not different entities. They convey yoga in a manner that is expressive of the mental and physical attributes of the founders.
Internalizing multiple expressions of yoga sheds light on the connection points between them. Identifying such connection points collapses the boundaries housing the myriad of yoga expressions along with systems outside of yoga. Through internalization the assorted yoga methods and systems become one.
Yoga with Perumal is made up of 6 parts. The 6 parts act as an underlying fixed foundation. The 6 parts of Yoga with Perumal are pranayama, preparatory, salutation, strength, stretching and meditation. Each part following in the order listed acts as a synergist to the other.
Yoga with Perumal online videos endeavor to lead the way to connection points within yoga methods and systems in order collapse boundaries. Yoga with Perumal is an ever evolving yoga. It does not believe in a fixed form. If there is a form then that form will inevitably evolve to take a new shape. Ultimately the goal is to connect into the hidden aspects of yoga and discover ones own yoga practice.
The Yoga with Perumal retreat method adapts to the moment with a strong attention kept on the ones who have specific problems or injuries. A result is felt immediately after the first lesson which creates motivation. Usually after the fourth lesson, participants experience a breakthrough in the practice and physical wellness that is measurable and often expressed. Some practitioners finally stop feeling an old shoulder or back pain that bothered them for years. Others accomplish postures for the first time that they always had trouble doing back home. This has to do with not only the method of yoga we are practicing but also the program as a will get the chance to deepen your understanding of the golden rules in yoga, avoid monotony or injuries while practicing, appreciate the benefits of regularity, build stability and find balance and your own path in yoga.
Our retreat method sessions are developed from the simple to the more challenging postures. The practice is not too light which would void the benefits of increased circulation, improved digestion, and detoxification. Yet sessions are not too strong to avoid becoming adrenalized and non-meditative. The method is instructed meditatively encouraging the body to open in progressive layers without being pushy or punchy. For 2 plus retreat participants classes are roughly 90 minutes and practiced twice a day. If you are the sole retreat participant we teach one daily class of 90 minutes.
The same sequences are not repeated over successive sessions. Each class is synergistic with every lesson acting as a step into the next session. Our yoga retreat classes collectively create a whole felt within your entire being. The below link sequence samples provide an insight into what is practiced on each lesson. Sequences are adapted to the individual or group. Participants coming into the retreat, after the group has already formed, will begin at the current sequence being followed. All yoga lessons are ending with meditation and relaxation. The Yoga with Perumal retreat method enables experienced and beginners to practice together.
More about our retreat method on following link:

Yoga with Perumal Teaches at