The ultimate selection of teacher trainings - explore by style, country, dates, and budget. If you don’t find it on YogaTrail, it doesn’t exist!

Kriya: Kriya Yoga is described by its practitioners as the ancient Yoga system revived in modern times by Mahavatar Babaji Nagaraj, as a synthesis of ancient teachings of the 18 Siddha tradition. It includes a series of techniques or 'kriyas' grouped into five phases or branches: asanas, pranayama, meditation, mantras and bhakti, which leads to an integrated development of human potential, physically, vitally, mentally, and spiritually. Paramahamsa Yogananda taught that practice of Kriya Kundalini Pranayama can accelerate the natural progression of Divine Consciousness in human beings. Babaji's Kriya Yoga is a path of self-realization in which the physical body is seen as the temple of the Divine. 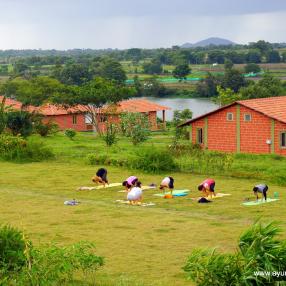